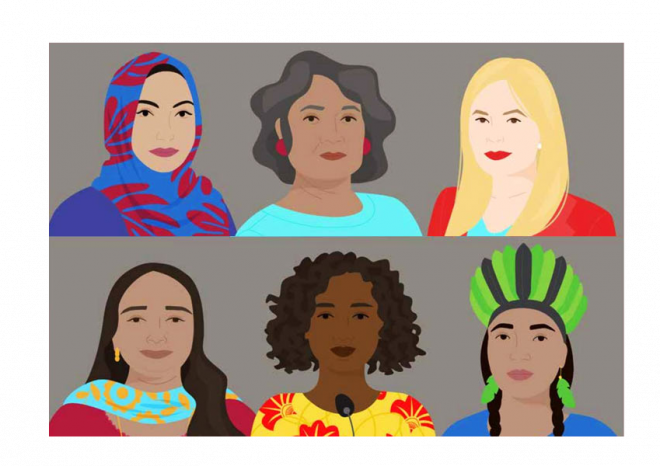 25 MARCH 2021
FREE PRESS UNLIMITED: Countering gender-stereotyping: media's role and connections with regulatory frameworks
On March 25th, Free Press Unlimited (FPU) partnered with Global Forum for Media Development (GFMD), International Media Development (IMS), SembraMedia, Fondation Hirondelle and Canal France International (CFI) to host a discussion on gender stereotyping and the role that media plays in creating or countering dominant and traditional narratives about gender roles within soci eties. The  session also explored the possibilities within regulatory frameworks, looking at ways that regulation can stimulate media organisations to become more inclusive without meddling too much with content itself. Together with five speakers, each of whom are involved with gender in the media in a different way, a fruitful discussion took place.
Read more
Link
Watch the event
25 MARCH 2021
PAX: The Role of Women Leaders: How to increase women participation in the military and peacekeeping.
Over the past decades, inequality and the marginalization of women and girls have significant impacts on peace and security dynamics, both for individuals and communities. Despite international commitments to increase women’s participation, including in UN peacekeeping, these pledges often remain under-fulfilled. At the same time, we have seen the fierce force for peace, justice, and innovation that women can be when they are able to directly and actively participate in peace processes. On March 25, PAX’s General Director Anna Timmerman presented concrete steps to break down current barriers and ideas for how to ensure women’s full, equal, and - most importantly - meaningful participation for peace. Her speech at the CSW65 side-event "The Role of Women Leaders: How to increase women participation in the military and peacekeeping” was co-hosted by the Governments of Latvia, Canada, Liberia, the Maldives, and Norway.
Read more
Link
Watch the event
Questions or reflections PoC@paxforpeace.nl
24 MARCH 2021
Partnerships to Accelerate Global Action to End FGM/C by 2030
By Bertine Pries, Manager Advocacy, Amref Netherlands
Parallel event at the virtual 65th Commission on the Status of Women.
This event was organised by The Global Platform for Action to End FGM/C with Amref Health Africa as one of the founding members of the Platform. Female genital mutilation/cutting (FGM/C) is a global concern, practiced in at least 92 countries, which requires a global response. That’s why civil society organizations, activists and survivors from all continents started this Global Platform two years ago during a pre-conference at Women Deliver 2019 to build global collective action to end FGM/C by 2030.
You can view the recording of the session "Partnerships to Accelerate Global Action to End FGM/C by 2030: a CSW65 virtual parallel event” below. And don’t forget to watch the poem "Dear Fathers and Brothers”, by Josephine Kiaga.
Read More
Link
Watch the session
terug

To the CEDAW Committee: Sex work is work. It is not trafficking.

On 02 June, International Sex Workers’ Day, the Count Me ...