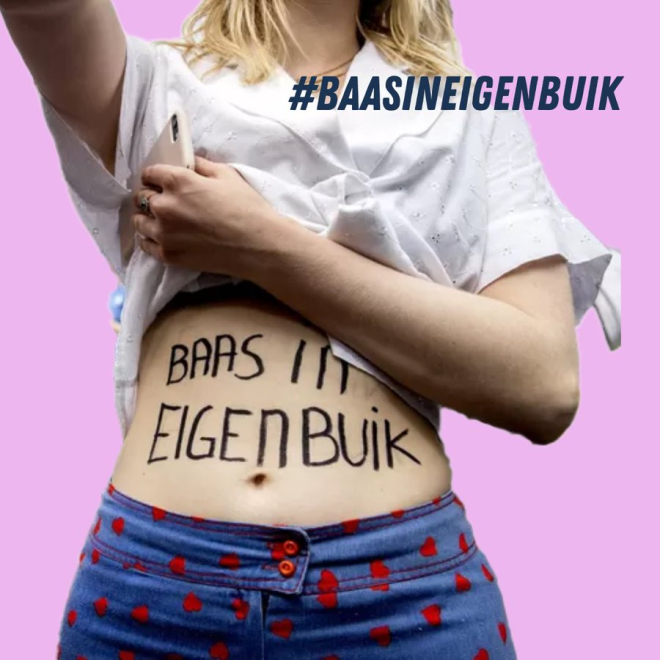 28-06-2022
With the US Supreme Court's decision to abolish "Roe vs Wade" last Friday, 50 years of abortion rights in the US were reversed. While in many countries - think of Argentina, Mexico, Benin, Kenya, Ireland but also the Netherlands - progress was recently made when it comes to access to a safe abortion.The US seems to swim effortlessly against this current. WO=MEN, along with over 170 women's rights and health organizations, signed a call to governments to protect the right to safe access to abortion.

While in the Netherlands the Council of Ministers was meeting to discuss the new Foreign Trade & Development Cooperation (BHOS) memo, on June 24, 2022, the U.S. Supreme Court overturned the important ruling in the Roe v. Wade case. This case has ensured that the right to safe access to abortion in the U.S. was regulated at the federal level since 1973. This means that individual states had to comply with it. At the time, the U.S. Supreme Court held that the right to abortion was implicit in the constitutional right to privacy. Now that this right to abortion has been eliminated at the federal level, abortion will likely become illegal in about half of the states.
In the statement that WO=MEN signed, the women's rights and health organizations warn of the harmful effects on the health of women and girls from this change in the law, as well as the effects on other human rights and democracy:

"Ensuring access to safe, quality abortion is an imperative. Abortion is recognized as essential health care that must be provided by governments. Access to safe abortion is also a human right. Attacks on reproductive freedom are attacks on democracy and international human rights standards, on individual freedoms and the right to privacy, and they impede progress toward gender equality."


The call is not only aimed at the U.S. but is relevant worldwide. Also to the Netherlands. The five-day mandatory reflection period on abortion may have been abolished here this year, but at the same time a growing conservative backlash is visible while the right to a safe abortion is still part of the Criminal Code.

Since the composition of the U.S. Supreme Court is unlikely to change in the foreseeable future, activists there expect even more rights to be trashed. These include access to contraception and the right for same-sex people to marry.

From the Special Procedures of the UN Human Rights Council, a joint response by nine independent experts, largely Special Rapporteurs on a variety of topics, came immediately after the decision. They show that the right to abortion is part of a whole range of human rights: from the right to health, equality and protection from violence to rights of people with disabilities and the right to privacy.

"Legal protection of access to abortion and of the right to abortion is enshrined in international law to ensure that women can exercise their legally protected human rights to life, health, equality and non-discrimination, privacy, freedom from torture, cruel, inhuman and degrading treatment, and to safeguard them from gender-based violence."

Marieke van der Plas, director of Rutgers, also emphasizes that abortion is about much more than ending a pregnancy:

"Abortion is an indicator of a strong democracy. It depends on freedom of choice, self-determination, human rights. The right to abortion is therefore an issue for all of us."

Urgent Action Fund, our partner organization in the Count Me In! consortium, provides grants for urgent actions by women's rights organizations. They have spoken out directly against the U.S. ruling and are committed to support activism for and access to safe abortion. They are also calling on other philanthropists to do more:

"More money is needed to support those on the front lines, help people get abortions, and support the fight within states, at the local level, and at the federal level to reinstate and protect pro-choice abortion laws."

Although it will not directly solve the situation there, it is at least good to see that several Dutch ministers spoke out directly on Twitter against the U.S. Supreme Court's decision.

Also, looking at the simultaneously released BHOS policy, the Netherlands will continue to behave internationally as "a donor with guts" and to support sensitive issues like abortion. It is imperative that the Netherlands continues to uncompromisingly stand up for the right to self-determination of women and girls in all their diversity worldwide.

Blog
MESSAGE FROM A WARZONE: “YOUNG PEOPLE CARRY A LOT, BUT WE’RE NOT EVEN ALLOWED TO CONTRIBUTE TO PEACE.”

UN Security Council Resolution 2250 was a landmark for ...

Human Security Collective: Multi-stakeholder Dialogue as a Means for Practical and Systemic Solutions for De-risking