What we do | Program | Gelijk = Anders 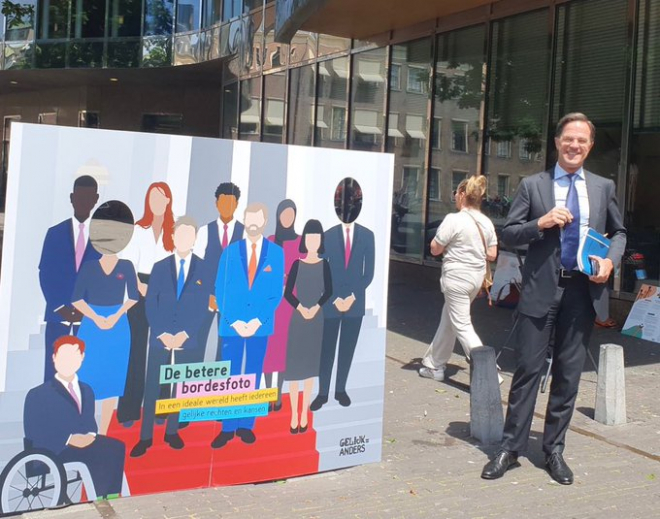 In 2015, the Equal=Different campaign was launched. That was 20 years after the last women's conference in Beijing. In 2020 we revived this campaign with a new website and new objectives (Gelijkisanders.nl). The main question was 25 years after the conference: How has the situation changed after 25 years. And that was disappointing. There is still a lot of work to be done to tackle gender norms, roles and stereotyping.
The first phase of the Equal=Different campaign focused on the public. Especially to young people who do feel that equality is an important theme, but may not yet be able to find the right words or arguments for it. We reached them with a series of videos. The films are about, among other things, the division of work and care and the stereotyping that both men and women encounter, or the lack of women and marginalized groups in leadership positions.
In the most recent phase, Equal=Different focused on politics, including a call to show political parties that equality is an important theme. In the call we ask, among other things, to reduce the pay gap, representation in decision-making and equality within families.

The coalition consists of WO=MEN, Atria, Rutgers, Cordaid, COC, WECF and the Alliantie Samen Work It. In addition, there are a large number of supporting organizations. Gender equality and women's rights are still under pressure worldwide. That is why WO=MEN are launching Dutch Gender Platform, WECF, Rutgers, Simavi, ActionAid, Cordaid, WOMEN Inc. and COC in the Equal=Different Campaign.

14-06-2022
WIDE+ has sent a public letter to European Politicians to provide feminist recommendations around the invasion of Ukraine.

07-06-2022
During a public debate facilitated by WO=MEN, we discussed with members, partners, donors and external experts what feminist leadership and organizing in ...