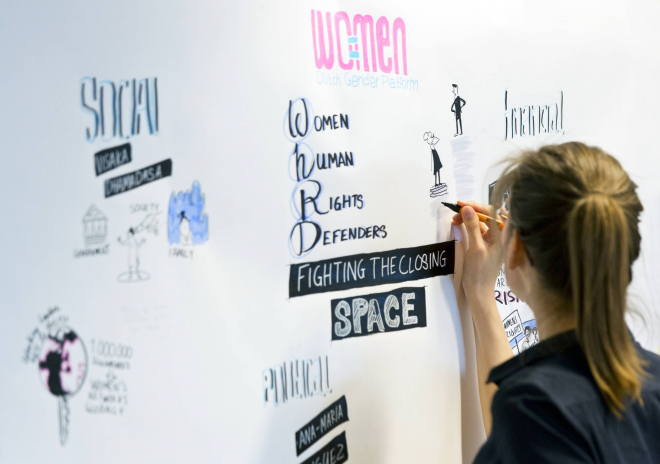 WO=MEN Dutch Gender Platform defends gender equality and the empowerment of women and girls in all their gender identities (SDG 5) on behalf of the Netherlands. WO=MEN coordinates the implementation of this development goal in national and international policy in the Netherlands.

The SDGs (Sustainable Development Goals) are seventeen goals to make the world a better place by 2030. The SDGs have been agreed by the countries that are members of the United Nations (UN), including the Netherlands. The goals came about based on global input from organizations and individuals.

The Sustainable Development Goals started in 2015 and will run until 2030. They are a global compass for challenges such as poverty, education and the climate crisis. They are the successors to the Millennium Development Goals, which ran from 2000 to 2015.

For us is SDG5, Achieve gender equality and empower all women and girls, a goal as well as a means to strengthen people, organisations, companies and education and knowledge institutes so that gender equality and women's rights can flourish nationally and internationally.

In order to help achieve SDG5, we formed new partnerships and developed tools, including the Gender Facts Game, the employer tool and the experience room. We also focused on the celebration of 100 years of universal and women's suffrage and the new convention against violence and harassment at work.

Who are part of the SDG 5 Alliance?

Where do we want to go?
Our ambition for 2030: The Netherlands is in the top 10 of the Global Gender Gap Report for the region of Western Europe and North America.
What does that mean in concrete terms?
Our goal is that by 2030 girls and women can count on:
How's the progress?
Together with our members, partners and organizations in business and education, concrete steps have been taken to achieve breakthroughs and achieve equal (power) relations between women and men, both internationally and nationally.
In the Netherlands, for example, 12 million euros has been made available for research into gender differences in health care. In 2019, the House of Representatives voted in favor of the women's quota for Supervisory Boards. Another historic milestone was on 1 July 2020, when the partner's leave was extended by 5 weeks against 70% continued payment of the salary.
In order to realize gender equality in the long term, we formulated the 6-point plan 'Vote Gender Equality' in 2020, supported by more than 30 partners, which we handed over to politicians on March 3, 2020 to tackle in the Netherlands. We hereby call on political parties to include this in their election programs for 2021. Together with Atria we made the gender equality checklist for the election program committees.
In addition, we call on Dutch people to make their voices heard and to sign the 'Vote Gender Equality' points plan.
In 2021, as an alliance, we are committed to making breakthroughs around the themes of gender-sensitive care, equal pay for equal work and the combination of work and care. We do this, among other things, by supporting an initiative memorandum and an initiative law on these subjects.

WANT TO KNOW MORE? GET IN TOUCH>>