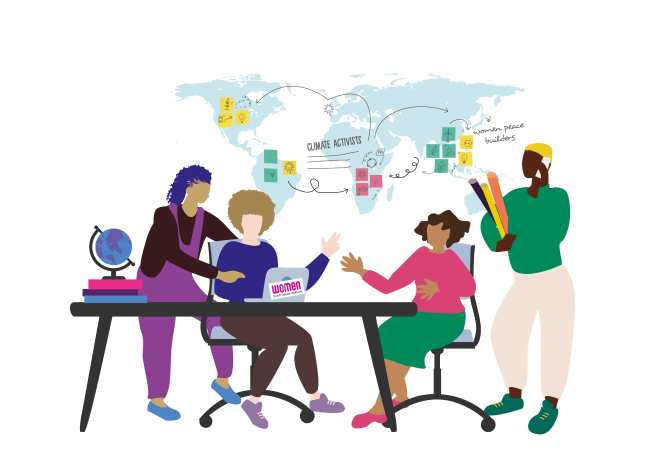 In the BHOS policy paper, the Cabinet expresses its intention that women and LGBTIQ+- people have the same rights and opportunities as men. The reality is that apart from gender, factors such as age, ethnicity, sexual orientation, mental or physical disabilities, religion and socio-economic class make a significant difference in people’s rights and opportunities.
Girls who are human rights defenders in Colombia and Kenya are not recognised by governments as political actors. So they are not heard in the UN spaces dealing with human rights abuses. Indigenous women who fight to keep their land and natural resources face the same issue. As do local women farmers who are often disproportionately affected by climate change and biodiversity loss. They are not heard by the relevant policy-makers because of their ethnicity or socio economic status. Women workers in the informal sector who earn their money as sex workers, cleaners or market sellers fell by the wayside in COVID-19 measures. People with disabilities, including a relatively high proportion of women and elderly people, have less access to emergency aid as a matter of course. Transgender people face severe discrimination in refugee camps.
When designing and implementing policy, always consider the intersection of gender and other factors that impact people’s equal rights and opportunities.
WO=MEN encourages the Cabinet and invites the Minister to carry out the realistic feminism opportunities mentioned above with our members and partners.
About WO=MEN WO=MEN Dutch Gender Platform is the Dutch network of women’s rights, diaspora and development cooperation organisations, entrepreneurs, soldiers, academics and activists who work for gender equality and women’s rights worldwide. WO=MEN is the biggest network in Europe in this area. For more information see www.wo-men.nl.
back

Blog
Backlash and Progress: Reflections about Recent SRHR Developments at the UN and in the USA