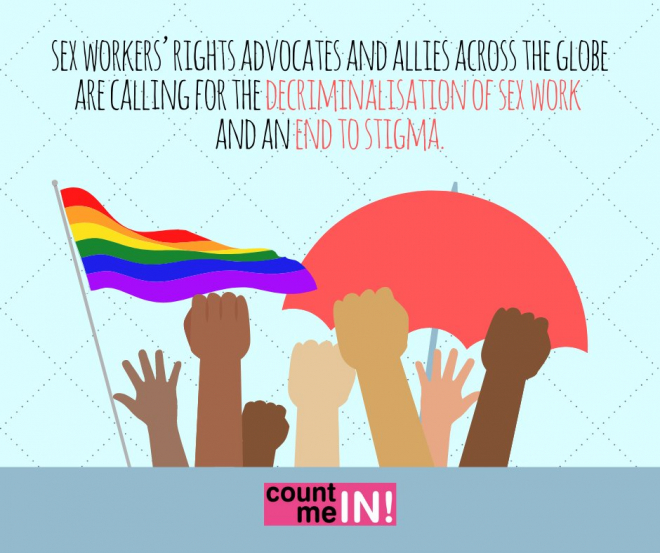 To the CEDAW Committee: Sex work is work. It is not trafficking.

On 02 June, International Sex Workers’ Day, the Count Me In! Consortium has issued a statement to show it stands in solidarity with sex worker-led organisations and networks advocating for sex workers’ rights and condemns the discriminatory and potentially harmful measures proposed in CEDAW’s General Recommendation 38.
Sex workers’ rights are central to human rights -particularly women’s rights -and for achieving gender equality, the consortium states. Yet, there continues to be disagreement about how best to ensure that sex workers are free from violence and discrimination. The recent CEDAW General Recommendation 38on trafficking in women and girls in the context of migration adds to misunderstanding of the distinction between sex work and trafficking and may increase discrimination against sex workers.
Understanding the difference between sex work and trafficking6is an essential step for effective anti-trafficking campaigns that both address trafficking and respect sex workers’ rights. Evidence confirms that poorly designed anti-trafficking interventions, such as those elements suggested by General Recommendation 38 inaccurately portray sex workers as inevitable victims and add to the stigma attached to sex work.
Read the full statement here
back

Agenda
Women included or excluded in G20: Implications on Gender