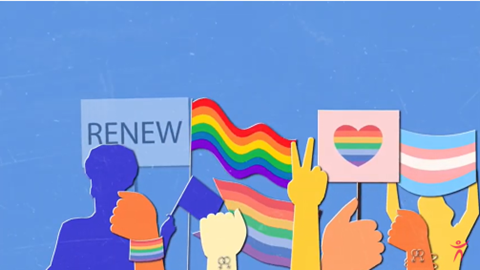 Together with over 1,000 organizations from 134 countries and territories, WO=MEN supported a call to the UN to renew the mandate of the Independent Expert working on countering violence and discrimination based on sexual orientation and gender identity (also known as IE SOGI). This call was made last week at the 50th session of the UN Human Rights Council (HRC) in Geneva. #RenewIESOGI

The Universal Declaration of Human Rights states that all human beings are born "free and equal in dignity and rights." Yet we still see a lot of discrimination and violence worldwide not only directed at women, but also often because of someone's (real or perceived) sexual orientation or gender identity (SOGI). In 68 countries, sex between two people of the same sex is criminalized. Sometimes it is even punishable by death. Trans and gender non-conforming individuals experience high levels of violence and are at increased risk of being murdered. The mandate of the IE SOGI clearly remains both essential and urgent.

To address the high levels of discrimination and violence on the basis of SOGI, an Independent Expert was first appointed by the UN Human Rights Council in 2016, for a three-year term. In 2019, the mandate was renewed for another three years. Currently, Victor Madrigal-Borloz is the Independent SOGI expert.

The main duties of the IE SOGI are:

Several WO=MEN members (or their headquarters), including CHOICE for Youth & Sexuality, Hivos, MenEngage Alliance, Oxfam and WILPF, also signed on.

Short videos explaining this Independent SOGI Expert can be found here and here.

Blog
Backlash and Progress: Reflections about Recent SRHR Developments at the UN and in the USA