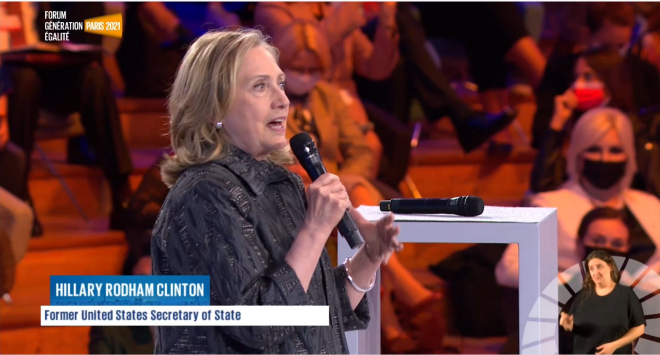 Billions of euros were pledged to support efforts to tackle gender inequality during the Generation Equality Forum,  the largest international conference on women’s rights in more than 25 years. The Forum, hosted in Paris by UN Women and the governments of France and Mexico, will launch plans to radically speed up progress over the next five years."
The world has been fighting for gender equality for decades, but progress has been slow. Now is the chance to reignite a movement and deliver real change,” said Melinda Gates, co-chair of the Bill & Melinda Gates Foundation, which announced a new commitment of €1.77 billion over five years to economic empowerment, health and family planning, and accelerating women in leadership. "The beauty of our fight for gender equality is that every human being will gain from it.”
Other pledges of funding, and legislative changes, were announced in six areas: gender-based violence, economic justice, sexual and reproductive health rights, climate justice, technology and innovation and feminist movements and leadership. A compact addressing women’s role in peace and security and gender equality in humanitarian programming was unveiled on the last day.
Heads of state from Sweden, Finland, Argentina, Kenya, South Africa and Tunisia joined French president, Emmanuel Macron, and Mexican president, Andrés Manuel López Obrador, in person.
Former US secretary of state, Hillary Clinton introduced a 17-year-old Chilean feminist named Julieta Martínez, who said girls her age who fight for equality "feel alone.”
We need to make sure that the institutions that wield the power, will never be able to turn away again. Because the demands that will be coming from all of us, and particularly from this next generation, will be unbelievably strong and focused,” Clinton said.
US vice-president, Kamala Harris told the forum that gender equality was paramount to strengthening democracy. "If we want to strengthen democracy, we must fight for gender equality. Because here is the truth: Democracy is strongest when everyone participates and it is weaker when people are left out,” Harris told the summit by video link.
Even through there has been some progress since the fourth world conference on women brought 47,000 activists to Beijing in 1995, nowhere in the world are women on equal footing with men. Waves of opposition to women’s rights have emerged, and structural barriers still exist.
In a press conference, Phumzile Mlambo-Ngcuka, executive director of UN Women, said the forum was a reaction to slow achievement of both the Beijing action plan and the UN’s sustainable development goals, and made more urgent by the disproportionate impact of the pandemic on women.
"Beijing was not financed and we’ve struggled in the last 25 years to implement it,” she said.
Commitments include:

26-09-2021 From Inequalities and Vulnerabilities Towards Prosperity ...