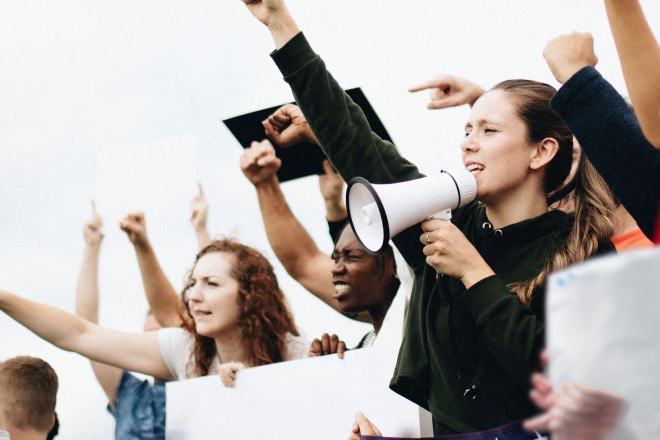 Speak up for gender equality and women's rights

Gender equality and women's rights are under pressure worldwide due to a growing conservative opposition. WO=MEN Dutch Gender Platform calls on everyone who cares about gender equality and women's rights to speak out.
On Thursday 22 October 2020 the United States and 31 other countries signed a declaration in which they speak out against abortion. That same afternoon, the Polish Supreme Court decided that abortion due to foetal defectsis unconstitutional. Following this ruling, ANA (Abortion Network Amsterdam) immediately saw the number of requests for help from Poland increase and Women on Web is providing free abortion pills. Threats to abortion clinics have also been increasing in the Netherlands for some time now. Access to safe abortion and sexual and reproductive health and rights (SRHR) for women in all their diversity cannot be taken for granted. While autonomy is a fundamental right that was already fought for in the 1970s with the well-known 'Baas in eigen buik'-cry.
These are not isolated developments. Conservative forces increasingly know how to find each other. Through the rhetoric of conservative political leaders, people feel strengthened and legitimized to spread their anti-gender ideologies. This summer, Poland and Turkey announced their intention to withdraw from the Istanbul Convention, the treaty to protect women from violence - an important treaty at a time when violence against women is rapidly increasing. Hungary adopted a new law prohibiting the legal recognition of transgender and intersex people. And Brazil's President Bolsonaro introduced education reforms referring to inequality, racism or gender as 'ideological brainwashing'.
Growing movement
The global conservative opposition is mobilising quickly and effectively against gender equality and hard-won rights. But there is also a growing and diverse movement for the preservation of fundamental human rights. For example, on 23 October in Poland thousands of pro-choice protestors took to the streets against the further restrictions of the abortion law. In Mexico women went on strike because of the growing number of cases of gender-based violence. In Belarus thousands of people demonstrated against President Lukashenko and the Netherlands was part of a joint statement on SRHR.
The focus of gender equality and women's rights organisations is on holding the line to protect those rights that have been fought for for decades. Whereas progress is necessary.
WO=MEN Dutch Gender Platform calls on everyone to speak out for gender equality and women's rights. To stand up in solidarity with women's rights activists worldwide who risk their lives because they speak out for fundamental rights. Politicians from the entire spectrum, policy makers, people on the street: add your voice. Use the hashtag #SpeakOutForWomensRights on social media. Are you a member of a political party? Make sure that gender equality and women's rights are well anchored in election programmes.
Gender equality and women's rights should be a top priority on the (inter)national political agendas. That includes the right to safe abortion services. It is crucial that the Netherlands continues to provide political and financial support to women's rights organisations and activists in order to effectively counter the increase in violence against women. As well as to ensure that women can continue to speak out against harmful, restrictive and discriminatory measures. The Netherlands has an important role to play as an advocate for gender equality and women's rights.Gender equality and women's rights are fundamental human rights, not a luxury.
#SpeakOutForWomensRights

Addressing issues of gender and social inclusion in ...

Gender equality and women’s empowerment are matters of ...

Expert Round Table: The Role of Dutch Missions in the Protection of Women, Human Rights Defenders