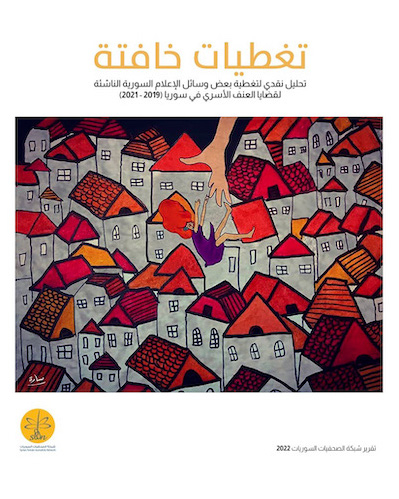 
During  work on this research, and even until writing the last words of it, the news of murders against women and girls in Syria has not stopped cycling through the emerging Syrian media platforms.
These crimes are the latest in a precedent and ongoing series of domestic violence chain deeply rooted in Syrian societies since decades of time.

SFJN invites you to attend a webinar to launch a report" Subdued Coverage” which aims to study and observe media patterns and methods in which domestic violence issues against women and girls are addressed by a sample of emerging/alternative Syrian media institutions and feminist organizations.
It highlights their role in reducing or enhancing this social problem and the effects on victims/ survivors of violence and perpetrators. Hence the extent to which it contributes to the pursuit of social justice and gender equality. The report relies on feminist discourse analysis tool that combines the theory of critical analysis of media discourse and media theories. The mentioned tool is in line with the research objectives, the specificity of the topic, the Syrian context, and the work context of the media institutions included in the research sample.
Register here