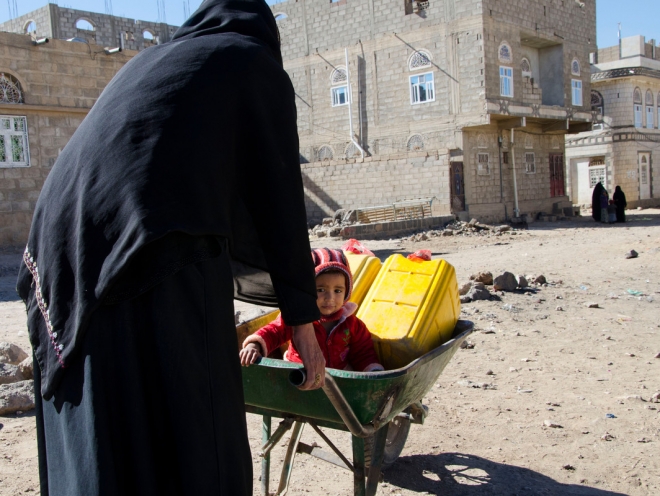 Women, Peace and Security in Yemen


On the margins of the 42nd Regular Session of the Human Rights Council, the Permanent Mission of Germany in Geneva, CARE, WILPF, Oxfam and WO=MEN Dutch Gender Platform are pleased to invite you to a side-event on:
Women, Peace and Security in Yemen
Claiming the Right to Participate in the Peace Process – From the Ground Up
This event brings women civil society leaders from Yemen together with representatives of the international community to identify concrete opportunities to improve international support for the meaningfulparticipation of Yemeni women in humanitarian response, peacebuilding and security.
More specifically, with this event, we aim to: 1) Provide practical recommendations based on Yemeni women peacemakers’ experiences regarding  full and effective participation of women in the peace process in Yemen 2) Provide a better understanding of local-level peacebuilding efforts in track III – often linked with humanitarian response – and how this can be connected to track II and track I diplomacy.
Please RSVP by sending an email to kvbconsult@navigation360.org.
Please note that any participant without an access pass to the UN in Geneva will need further instructions how to request access to the venue in advance! We can provide those instructions after receiving your RSVP.

Opening Remarks by the Permanent Mission of Germany

Topics
Situation analysis of Yemeni women’s diverse mobilization and inclusion strategies and initiatives in the peace process across the different participation tracks, with special insights on tracks 1.5,track 2, and track 3.

Current programs and initiatives on women’s participation in peace and political processes in Yemen, and political, social and economic factors, often linked to the humanitarian crisis, that hinder this.

The triple nexus ‘humanitarian-development-peace’ in the Yemen context, and the direct involvement and roles of women and youth.

Recommendations to address the obstacles and enhance the substantive and influential participation of Yemeni women in peacebuilding at various levels.

Plenary Conversation
The presentations will be followed by an open session, providing the opportunity to ask questions and offer further suggestions.
Background
Yemen is now in its fifth year of a conflict which has created the worst humanitarian and protection crisis in the world. 80% of the population – 24 million people – require assistance, tens of thousands of people have been killed or injured, and 3.6 million people are displaced. In light of this, the international community’s attention has largely been focused on the humanitarian crisis; less attention has been paid to the pre-existing conditions in the country and the way in which the conflict has exacerbated the patterns of inequality, disadvantage and discrimination faced by certain groups in Yemen.
One of the main drivers of conflict and meanwhile one of the main shortcomings of the current political process, is that it does not prioritize or adequately address Yemeni civilians’ priorities, concerns, and grievances. While women-led organizations and youth groups continue to mobilize for sustainable peace and an inclusive political process, their voices remain largely marginalized.
In order to advance peace in Yemen, international stakeholders need to work to foster an inclusive environment in which women and youth are able to collectively strategize and channel their priorities and expectations from the peace process prior, during, and after peace talks take place at the official level. The current, traditional, approach of the talks around Yemen is falling short in terms of inclusivity, as the two-party negotiations are excluding Yemeni civil society voices, particularly women’s voices.
This is in sharp contrast to the prominent role Yemeni women – and youth – played during the 2011 mass movement for political reform, and their structural inclusion in the National Dialogue in 2013-2014. It also negates the fact that Yemeni women are currently playing important roles in local-level tension reduction and conflict management.
This failure to include the views, needs and priorities of Yemeni women – both during conflict times and transition phases – not only renders the process gender-blind, but also jeopardizes the prospects for a sustainable and inclusive solution to the protracted conflict. This is in contradiction to the findings of several comparative research studies, that inclusive peace-making leads to better peace agreements and enhances the changes of their implementation.
Since 2015, when the conflict escalated in Yemen, four rounds of peace talks have been organized between conflict parties under the auspices of the United Nations; however, women and youth participation in the peace process has been very limited. In the most recent rounds of talks in Stockholm, only one woman out of 24 members of the delegations was present. While the UN Special Envoy tried to close the gender gap by inviting 7 Yemeni women technical advisors, they ended up participating on the sidelines of the consultations and were not allowed to take part in the closing ceremony.
Picture: Care Nederland / Care International.