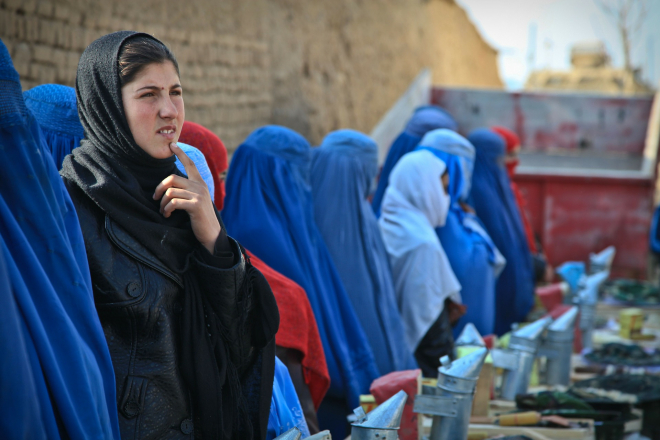 In a letter to United Nations (UN) agencies and member states, Feminist Action for Afghanistan, a global coalition of feminist, women’s rights organizations, and Afghan women condemns a growing pattern of exclusion of Afghan women from key mechanisms to address Afghanistan’s humanitarian crisis.
In advance of next week’s recognition of the anniversary of the UN Security Council Resolution on Women, Peace and Security (UNSCR 1325), the coalition is calling for governments and UN agencies to ensure that Afghan women’s representatives are involved at all stages of negotiations on economic support, trade, security and governance in Afghanistan.
"We state in the clearest terms that exclusion of women in general, and Afghan women in particular, from negotiations and all processes about the future of Afghanistan, constitutes defacto complicity with the Taliban’s agenda to eliminate women from public life and to reverse commitments to the human rights of women and girls,” the letter states.
The letter is a response to the failure of the international community to meaningfully include Afghan women in talks and negotiations, or to include them in discussions on conditions relating to the establishment of trust funds and other financial mechanisms to address the humanitarian crisis. It also comes as the United Nations Office for the Coordination of Humanitarian Affairs has failed to make clear that it will include Afghan women’s representatives in a decision making capacity that will have meaningful impact on the design, implementation, and monitoring of aid delivery.
The letter expresses the coalition’s readiness to partner with UN agencies and member states to ensure meaningful Afghan women’s participation at all levels of decision-making in the humanitarian response.
Read the letter here
Pict by Amber Clay
terug

Blog
MESSAGE FROM A WARZONE: “YOUNG PEOPLE CARRY A LOT, BUT WE’RE NOT EVEN ALLOWED TO CONTRIBUTE TO PEACE.”

UN Security Council Resolution 2250 was a landmark for ...

Human Security Collective: Multi-stakeholder Dialogue as a Means for Practical and Systemic Solutions for De-risking