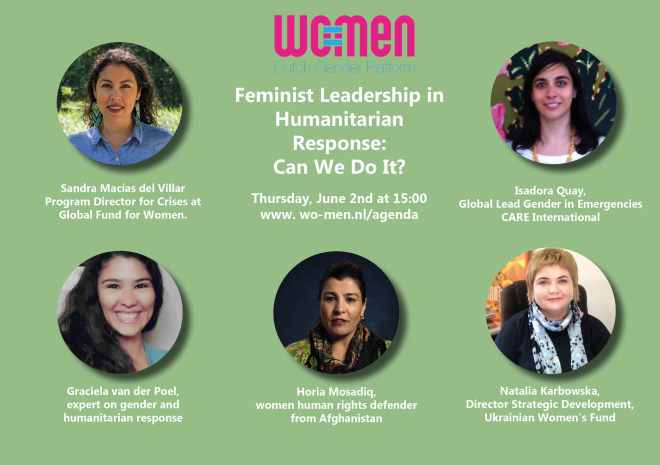 Debate: Feminist Leadership in Humanitarian Response: Can We Do It?


On May 13th the government of the Netherlands committed to develop a Feminist Foreign Policy. The Netherlands will follow in the footsteps of other frontrunners, such as Sweden, Canada, Mexico, France, Chile and Germany. But what does this new commitment mean for sectors such as humanitarian aid? How does feminist leadership and organizing in humanitarian response look like? And why would feminist leadership in humanitarian response actually matter
Language: English
Let op: deze sessie zal plaatsvinden in het Engels. Nederlandse vertaling zal beschikbaar zijn via eigen telefoon/padlet en koptelefoon.
Register here

Since 2016, humanitarian actors have pledged on different occasions to work with local gender equality and women's organisations in the design and implementation of emergency aid. Humanitarian actors also pledged to implement aid that meets the needs of women, men, girls, boys and gender non-compliant persons, which would also strengthen their position and rights.
Crises such as those in Afghanistan and Ukraine show that these commitments are not easily implemented: in the deployment of acute emergency aid, humanitarian actors face different barriers, which hinder successful cooperation with local gender equality and women's organisations and gender responsive and transformative aid. Barriers such as insufficient gender knowledge in-house, finding suitable local partners in the short term and (rigid) donor obligations. At the same time, local gender equality and women's organisations that act as first responders, sometimes out of necessity in crisis, often depend on funding from foreign donors and international organisations. Without recognition of their work, they risk not being able to provide or continue crucial services.

In crisis situations, moreover, the focus, and thus budgets, of donors and politicians shift from peacebuilding and development cooperation to emergency aid. Peace building and development cooperation, including gender responsive and transformative work is then (temporarily) paused because of the shift in priorities: from long-term advocacy and capacity building work with grassroots organizations, to the rapid and large-scale setting up of an infrastructure for the provision of goods and services. (Women's) organizations working on peacebuilding and development cooperation, and sometimes out of necessity needing to temporarily shift their own focus and work, advocate for flexible core funding.
During this public debate facilitated by WO=MEN, we will discuss with members, partners, donors and external experts what feminist leadership and organizing in humanitarian response looks like.
Aim of the session:
To raise awareness and initiate discussion among humanitarian actors regarding the need for feminist leadership for improved gender responsive and transformative humanitarian response.

Programme:
We are excited to have a very international expert panel available for this public conversation:

The session will be moderated by Anne-Floor Dekker and Nadia van der Linde.
The key questions that will be addressed are:

During the session, will share insights from WO=MEN’s upcoming publication ‘Raise the Ambition: Accelerate the Gender Transformative Potential of Humanitarian Action.’ This publication explores learnings, actionable practices and recommendations for advancing gender transformative change, even in emergencies.
You are invited to stay for drinks, snacks and informal networking directly following the session.
Register here