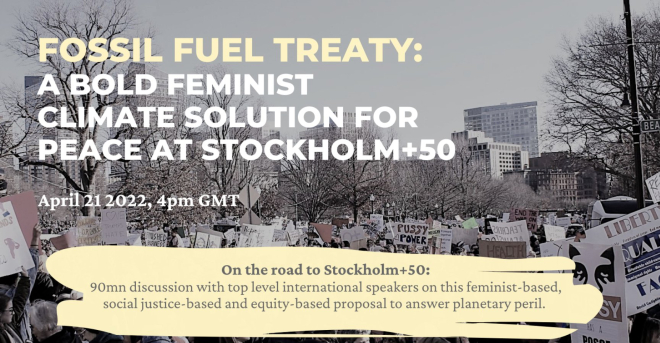 
Climate change is usually spotlighted as the greatest security threat to the planet and to human viability. In practice, it is the mutually-amplified threat of fossil fuels and militarism that produce climate chaos and that is wreaking havoc through entire planetary ecosystems and social systems.

As we are sadly witnessing in Ukraine, fossil fuels and militarism are inextricably linked and co-dependent. Together, they create and sustain the global addiction that is planet-threatening. Foregrounding fossil fuels also exposes the rampant profiteering and inequalities of capitalism that are sustained by patriarchal privilege, that are driven by distorted masculinities, and protected by militarism. The combined drivers of (fossil-fuel-based) profit and (militarised) power move planetary-scale destruction relentlessly forward.

Join leaders of the feminist peace movement to elevate the alternative values which have always been intrinsic to human survival: solidarity, equality, care and compassion, and community. Now we can build on these with a new legal norm: a Fossil Fuel Non-Proliferation Treaty.

After registering here, you will be sent a zoom link.