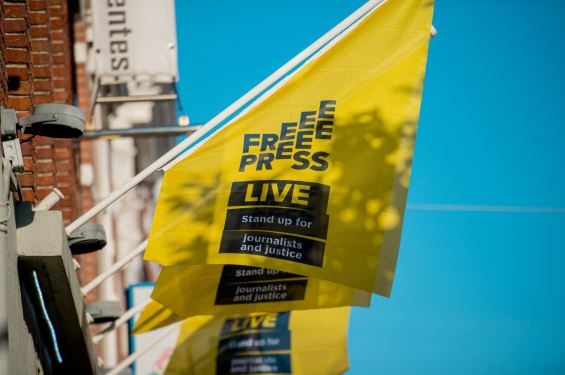 Free Press Live - Stand up for journalists and justice


Free Press Awards
During Free Press Live the following three awards will be handed out:
With these awards, we want to honour journalists who risk everything to bring us the news, media pioneers who pave the way for equality and justice and those who persevere under the most difficult circumstances. Journalists who have a strong commitment to press freedom and independent information.

End Impunity
Every week a journalist is killed for reporting the news and bringing information to the public. In the past ten years hundreds of journalists have been murdered, but in nine out of ten cases the killers go unpunished. This is not acceptable. We need to move from words to action. Read more about how to end impunity.

"No journalist anywhere should have to risk their life to report the news. Together, let us stand up for journalists – and stand up for justice”, Ban Ki-moon, Secretary-General of the United Nations.

Journalists play a crucial role in society. They function as a watchdog and expose crimes and injustice. However, some countries and regions make it close to impossible for journalists to do their job. They prosecute, threaten or use violence to intimidate and silence them. This has a huge impact on press freedom, investigative journalism and access to reliable information.
BOOK A SEAT FOR FREE PRESS LIVE 2020

WIDE+ has sent a public letter to European Politicians to ...