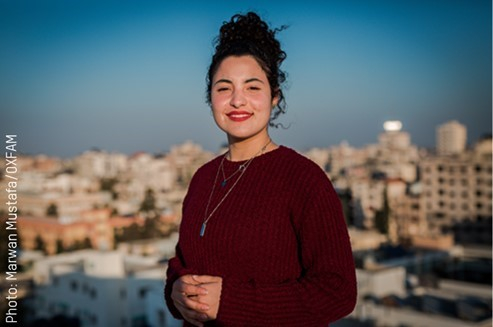 "Leading The Way”: Women Driving Peace and Security in Afghanistan, the Occupied Palestinian Territory and Yemen

In the face of conflict and insecurity, women across the globe are boldly advocating for women’s meaningful participation in decision-making on peace and security, and for the full and effective realisation of the Women, Peace and Security (WPS) agenda. Yet they face many barriers – including a lack of political support for the agenda nationally and internationally, as well as shrinking civic space and attacks and defamation campaigns. The Netherlands continues to position itself as a champion for the Women, Peace and Security agenda, and in December 2020 adopted its fourth National Action Plan on WPS.

It is a crucial moment to take stock. What strategies are women in conflict-affected countries using to ensure their voices are heard, and what barriers do they face? How has the Netherlands supported these efforts? At a time when women’s rights are under threat globally - what opportunities do we see for the WPS agenda? During the webinar Oxfam will share findings from their timely research "Leading The Way”: Women Driving Peace and Security in Afghanistan, the Occupied Palestinian Territory and Yemen.

The research is based on interviews with Women’s Rights Organisations (WROs) supported by Dutch funding. It outlines lessons learned, and barriers for the full and effective implementation of WPS agenda. Concrete recommendations for the Netherlands will be shared. This will be followed by a Q&A and discussion on how the Netherlands can further strengthen its support for the WPS agenda.
You are warmly invited to join this webinar on 5th February from 11.00 AM – 12.30 CET.
Registration
Please register at a.snel@wo-men.nl with your name and organization.
Deadline of registration is February 2nd 2021.
Program
11.00 - 11.15  Welcome & introduction
Kirsten van den Hul, Member of Parliament for the Labour Party (PvdA)
Suying Lai, Head of the SAFE Goal Unit at Oxfam Novib
Anne-Floor Dekker, Programme Manager Gender, Peace and Security at WO=MEN
11.15 – 11.30  Research findings and recommendations from ‘Leading The Way’,
Sarah Pelham, Policy Advisor Inclusive Peace and Security at Oxfam Novib
Reflections by Pascalle Grotenhuis, Ambassador for Women's Rights and Gender Equality / Director Department for Social Development, Ministry of Foreign Affairs
11.30 – 11.40  Women, Peace and Security in Afghanistan
11.40 – 11.50  Women, Peace and Security in the Occupied Palestinian Territory
Randa Siniora, General Director of the Women’s Center for Legal Aid and Counselling (WCLAC)
11.50 – 12.20  Q&A and Discussion
12.20 – 12.30  Wrap up
Speaker biographies
Randa Siniora is the General Director of the Women's Center for Legal Aid and Counselling (WCLAC). She is a human rights and women’s rights activist with a professional experience in the field of International Human Rights and Humanitarian Law for over 35 years. Siniora was the first Palestinian woman ever to brief the UN Security Council on Women Peace and Security (WPS) in 2018. In 2019, she was selected among the 100 most influential people in gender policy around the world.
Sarah Pelham is a Policy Advisor on Inclusive Peace and Security for Oxfam Novib. She works with partners and Oxfam staff in conflict-affected countries to support programming and advocacy on Women, Peace and Security. She holds a Double Research Master in Women’s and Gender Studies.
Pascalle Grotenhuis is Director for Social Development and Ambassador for Women’s rights and Gender Equality at the Dutch Ministry of Foreign Affairs since 1st of October 2020. Before her current position, she was Director of Protocol and Host Country Affairs. She joined the Ministry 17 years ago and held various positions. From 2015- until 2018 Pascalle was the Netherlands Ambassador to Mozambique. Before that she was heading the division for the Private Sector and Corporate Social Responsibility within the Ministry for Foreign Affairs of the Netherlands.
Kirsten van den Hul is a Dutch Member of Parliament for the Labour party (PvdA). She was elected to the House of Representatives during the general elections of 2017. Kirsten is a member of the Foreign Trade and Development Cooperation committee, and the Education, Culture and Science committee, among others. Previously, she worked as an independent change manager and was a columnist for the Dutch newspapers Trouw and Algemeen Dagblad. She also was an UN women’s representative and was a member of the Dutch government delegation to the General Assembly of the United Nations in 2011.
Suying Lai is Head of the SAFE Goal Unit in Oxfam Novib. She is responsible for the organization’s policy, campaigning and programmatic work on conflict transformation including Women, Peace and Security; humanitarian affairs; and displacement. Previously in the same organization, Suying worked as a program manager and policy advisor. Before joining Oxfam Novib Suying worked in Geneva on disarmament and security sector reform issues. Suying holds an MA Degree in Political Science from the Free University Amsterdam and was raised in Taiwan.
Delen:
Blog
WO=MEN - ALV debate on feminist leadership photo gallery